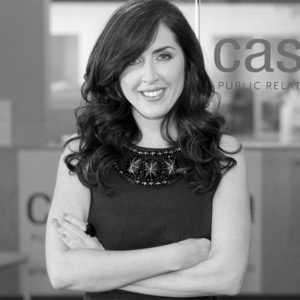 As a young entrepreneur in Philadelphia nearly 15 years ago, Nicole A. Cashman blazed the industry trail for lifestyle public relations and special events agencies in the region with the opening of Cashman & Associates in 2001. Her attention to detail, zest for hospitality and innate ability to market brands to influential consumers and deliver benchmark worthy campaigns, paved a new path for women entrepreneurs in the field.

As the CEO and President of Cashman & Associates, Nicole leads a team of strategic communications, brand management and special events professionals – who specialize in tourism and hospitality, fashion and retail, health and beauty, sports and entertainment, non-profit and real estate industries. Under Cashman’s trademark style and sophistication, the agency has amassed a high-profile local, national and international client list; representing the most prominent brands and organizations.

A Philadelphia native, Nicole began her career at Drexel University where she earned a B.S in Design and Merchandising with a minor in Marketing, along with completing a Co-Op internship with the flagship Saks Fifth Avenue store in New York City. Her success in retail continued with her role as Public Relations Director for Bloomingdale’s in New York City, where she managed communication and event initiatives for the New York metro region and Boston. She was then recruited as Director of Public Relations & Special Events for 28 Strawbridge’s stores in Pennsylvania, New Jersey, and Delaware.

Her prowess and desire to work with multiple brands, led her to strike out on her own and establish what is now one of the most respected and prestigious agencies; where along with her team, she has been responsible for the success of many media programs and high-profile events. The agency is known for working with a roster of major brands including the Center City District, Stephen Starr Restaurants, Visit Philadelphia (formerly the Greater Philadelphia Tourism Marketing Corporation), City of Philadelphia, Kimpton Hotels and Restaurants, Scannapieco Development Corporation, Comcast, Live Nation, Niche Media Publications, and more.

Nicole’s dedication to the community is a value she’s instilled into the core of her company where giving her time as a volunteer is paramount, as well as dedicating a robust corporate giving policy. Nicole’s presence has been seen on the board of organizations including the Philadelphia Art Alliance, the Greater Philadelphia Film Office, City of Philadelphia’s Mural Arts Program and The Power Shift; as well as leading committees for the 2016 Democratic National Convention, Friends of Rittenhouse Square and Gift of Life.

In addition to her charity work, Nicole enjoys spending time with her husband and son at their home in Philadelphia and vacationing in Newport, Rhode Island.