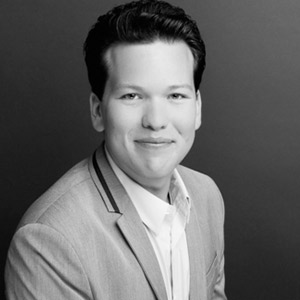 An activist, volunteer and philanthropist since the age of 11, Garrett Snider has devoted his life to creating awareness of the problems faced by youth. Among those problems is the sexual abuse pandemic, and Garrett has designed a multitude of programs that have helped ignite robust conversations on the topic of juvenile civil rights.

Having been raised amidst family dedicated to their philanthropic efforts, Garrett developed this connection to disenfranchised youth during the creation of Snider Hockey; the mentorship program founded by his grandfather and sports magnate Ed Snider.

Garrett has worked with Mission Kids Child Advocacy Center since 2009, beginning as a volunteer and chairing multiple committees. He’s participated in over 100 hours of Darkness to Light training and has helped grow the annual Mission Possible event to represent over 1/3 of Mission Kids’ annual operating budget.

In 2015, Garrett wanted to shine a brighter light on the trauma that children face while passing through the harsh legal system that awaits after disclosure of abuse. The first annual Resilience Dinner was born from this idea and was co-chaired by Monica Lewinsky, who drew from her legendary TED Talk earlier that year in a speech on shame and survival.

Snider also serves on the board of the Petit Family Foundation; founded in 2007 by Dr. Bill Petit as the lone survivor of a brutal home invasion that claimed the lives of his wife and two daughters. The foundation is a champion for women of underprivileged backgrounds seeking education.

In 2016, Garrett created The Childhood Resilience Foundation; a resource that extends services to victims of abuse and neglect. The foundation was unveiled during National Child Abuse Prevention Month, during which a partnership with the Beau Biden Foundation resulted in the first-ever Child Abuse Prevention Day at a major-league sporting event. In 2017, the foundation installed a new Board of Directors whose expertise spans a myriad industries and fields. The Board continues to add programs that embody healing, while putting forth new and exciting opportunities to engage in the education and protection of young people.

Support Us
Standing resilient amidst Coronavirus

Our thoughts and prayers are with you during these trying times. As we forge ahead, school closures and other social distancing measures are calling on us to establish new ways of serving our children and families. We won’t stop doing so. Not now, not ever. Thank you for your continued support.